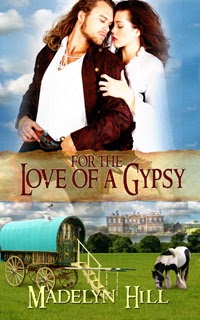 For The Love Of A Gypsy

She has sworn her loyalty to her clan. He has pledged to prove his innocence. Together, Martine and Declan fight for their love and innocence in a world that seeks to keep them apart.

Sounds like a great hook and I love the cover. I could fall for Declan. Love long hair on a man.

Can she betray the Gypsy clan who saved her for the love of a stranger?

Martine Petrulengo is stifled by the traditions of her adopted Gypsy clan. They gave her new life when she was left all alone. And now she is expected to marry in order to forge clan allegiances. When she nurses handsome and charming Lord Declan Forrester back to health, she is lured by the seductive idea of life outside of the clan—and the prospect of love with the Irishman.

Can he prove his innocence in order to claim his Gypsy?
Lord Declan Forrester trades prison bars for a loveless marriage in order to save his soul. And now he’s trying to prove his innocence not only as a traitor, but that of his wife’s murder.  When the lovely and beguiling Martine saves him, he falls in love for the first time. Yet, the obstacles of his past seem insurmountable.

Martine and Declan must fight tradition, prejudice and the haunting ghosts of their past in order to fight for their love and ensure their future.

A rider urged his horse forward. He wore a leather doublet of a quality she’d never seen. The black hide was pierced with metal and thick stitching formed elaborate Celtic designs. Regal and rich. His breeches hugged his thighs so closely ’twas indecent, but that didn’t stop her gaze from venturing along the hard expanse of his legs. Heat crept up her neck and flushed her face like a flame.
He tipped his head in her brother’s direction. Martine gasped.
The stranger from the glen.
“We’ve business,” was all he said.
Rafe nodded, but didn’t twitch a muscle. Martine wanted to run from the confrontation, hide in her grandmother’s berth safe from the bewitching blue eyes of the intruder. But her feet stayed rooted to the ground.
Och, this man was handsome. Strong jaw, brilliant eyes, and a broad mouth composed a man so striking. His face was a composite of hard planes of granite that matched the intense glare of his eyes.
The man sighed and his comrades inched closer to his side. They dressed as he did, except their clothing lacked the obvious quality she could see stitched in the leather of his.
“The villagers are concerned with your presence, Gypsy.”
She could feel the tension in the tight line of her brother’s shoulders, taste the anger in the air that hummed about him and the stranger. His jaw clenched and he remained silent.
“I’ve come to ask you to leave.

Martine Petrulengo will be wed in less than a month—to a man she has never met.

Lord Declan Forrester is running for his life after his wife is found murdered.

Can she betray the Gypsy clan who saved her and gave her a new life?

Martine Petrulengo will be wed in less than a month—to a man she has never met.  When her clan rescues an injured lord, she is tempted to betray them and be swept into his loving arms.

Lord Declan Forrester trades prison bars for a loveless marriage in order to save his soul. And now he’s trying to prove his innocence not only as a traitor, but that of his wife’s murderer.

Together Martine and Declan fight tradition, prejudice, and the ghost of Declan’s past in order to have a future together.

Can Martine and Declan’s love survive prejudice and the ghost of their past?

Bio:
Madelyn Hill has always loved the written word. From the time she could read and all through her school years, she'd sneak books into her textbooks during school. And she devoured books daily. At the age of 10 she proclaimed she wanted to be a writer. After being a "closet" writer for several years, she sent her manuscripts out there and is now published with Soul Mate Publishing. And she couldn't be happier! A resident of Western New York, she moved from one Rochester to another Rochester to be with the love of her life. They now have 3 children and keep busy cooking, watching their children's sporting events, and of course reading!
Social Networking Links:
Website:  www.madelynhill.com
Facebook: https://www.facebook.com/madelyn.hill.94
Twitter:  https://twitter.com/AuthorMaddyHill
Pinterest: http://www.pinterest.com/madelynhill68
GoodReads: http://www.goodreads.com/author/show/2919194.Madelyn_Hill
Other Books by Madelyn:
Wolf's Castle - June 2014 - http://amzn.to/1qzxvbq
Heather In The Mist - July 2015