Seventeen-year-old Sasha Bishop has done what no other Slayer has, she survived to the retirement age of seventeen. Now she gets to move to a new city, start a new school during her senior year, and has to leave behind her 167 year old, semi-unofficial, undead boyfriend, Hutch aka Andrew Hutcherson.
At her new school, Sasha becomes friends with her handsome, motorcycle riding, neighbor, Dillon Hutcherson, who bares an uncanny resemblance to Hutch. Sasha digs into the mystery and finds that Hutch fathered a child before he was changed into a vampire in 1865. Further research reveals that Dillon is, in fact, Hutch’s great-great-grandson. Now Sasha, with Dillon in tow, must return to her hometown and resume her past duties as the Slayer in order to quell a vampire uprising.
During the initial battle Dillon is attacked and starts changing into a vampire. Only the quick action of Sasha’s Watcher, Branson Seyfried, saves the boy from becoming one of the undead. A transfusion consisting of Hutch’s vampire venom and Sasha’s slayer blood saves Dillon, but gives him the life of a Halfling. In addition, Hutch now has slayer blood and Sasha has vampire venom. The three are not only a danger to humans, but to vampire kind.
The impending war between human and vampire is nothing compared to the war within Sasha’s own heart as she battles her feelings for Hutch and his grandson. During the final battle, Sasha learns many family secrets, discovers her hearts true love, and finds happiness in a world filled with shadows.


A low growl came from deep in his throat. “Stop. I have no control where you are concerned.”
I yanked my hands down and smacked them against his chest, killing the mood. “No control? You barely touch me.”
Hutch stared at me like I was crazy. “That’s a lie. I touch you all the time when we are kissing.”
“Not where I want you to.” I retorted.
Hutch froze. “What do you mean? Like in bed? You want to go to bed with me?”
I rolled my eyes. “Duh, Hutch. You are my semi-non-official-undead, boyfriend. Of course I want to go to bed with you.”
Hutch stepped back. “You’re too young.”
I gave him a pointed glare. “You are over 167 years old. I am seventeen, almost eighteen. You were eighteen when you conceived your child.”
“The times were different then. Eighteen in 1865 is like thirty in 2012,” he stammered.
Are you kidding me? “Is that your excuse? I’m not a fifteen year old girl anymore.” I dropped the towel where it pooled around my bare ankles.
Hutch’s eyes were huge in their sockets. “No, you are not fifteen anymore.”
I wrapped my arms around his neck. “Kiss me.” 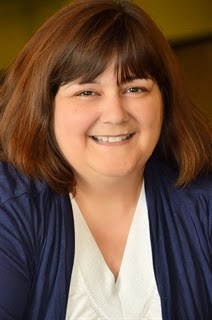 
It was a dark and stormy night. The wind blew the small car all over the road as the young couple rushed to the hospital. Twelve hours later, Carly Jordynn was born. Life has been a rollercoaster ever since.


Carly Jordynn is a writer from Northern Kentucky who loves to weave tales of fantasy, paranormal, and romance. When she isn’t writing a book, she writes lyrics for the Christian band, Phil Parks and One Step Closer.


Carly loves to travel. You can find her at various conferences and other author events throughout the year. Her hobbies include: travel, photography, reading, party-planning, dinner with friends, and hanging out with her family.


Carly is a member of the Romance Writers of America and the Society of Children’s Book Writers and Illustrators.